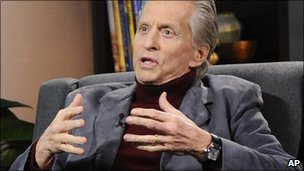 He made the revelation to The Guardian newspaper, three years after he was diagnosed with the disease.

The Fatal Attraction star was hospitalised in the early 90s for an addiction which some at the time claimed to be sex.

Douglas himself denied this and said he was in rehab for alcohol abuse.

What is HPV, and what are the risks?

Human papillomavirus is an infection that causes genital warts. In England, they are the second most common type of sexually transmitted infection after chlamydia.

In most cases, genital HPV infections cause no real symptoms and clear up by themselves without causing any problems.

HPV comes in more than 100 different strains and some can trigger cancers.

Most cases of genital warts are caused by ‘low-risk’ HPV types 6 and 11, meaning they do not pose a significant cancer risk.

High-risk types include HPV 16 and 18 which can cause cancer of the cervix in women.

Other types of HPV can cause visible warts and verrucas, such as those commonly seen on the hands and feet.

Although HPV is implicated in some throat cancers, smoking and alcohol are far more common risk factors.

Prof Robin Weiss, an expert in Viral Oncology at University College London says: “This type of cancer is relatively uncommon in the adult population yet oral sex is common and far, far more people carry the virus in their throats than actually develop the cancer.”

How is HPV spread?

HPV infection can also be spread through oral sex.

It can take up to one year for warts to develop after infection with HPV. Therefore, if you are in a relationship and you get genital warts, it does not necessarily mean your partner has been having sex with other people.

HPV is most likely to be transmitted to others when warts are present, but it is still possible to pass the virus on before the warts have developed and after they have disappeared.

Condoms do not provide complete protection because it is possible for the skin around the genital area (not covered by the condom) to become infected.

How can I avoid HPV?

Although condoms do not offer complete protection against HPV, it is still advisable to use them to minimise the risk of infection.

You’re more likely to become infected with HPV if you start having sex at a younger age and if you have a lot of sexual partners, especially if you’re having sex without using a barrier method of contraception.

There is a vaccine that protects against some of the high-risk strains of HPV, but it must be given before there is any chance that you have been exposed to HPV infection.

How do you know that you have genital warts?

Some infected people will show no signs, while others will have visible warts.