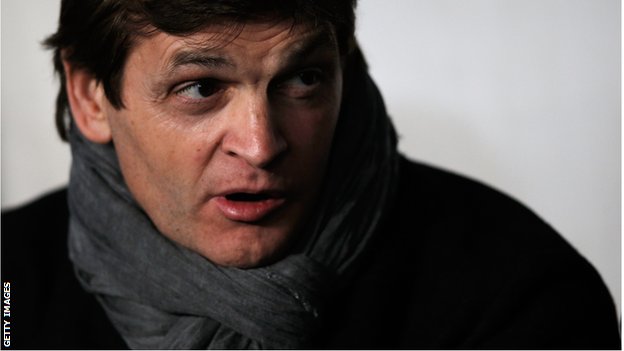 Vilanova had a tumour removed from his throat in November 2011 before suffering a relapse in December 2012.

He stepped down as Barca boss last July to continue his treatment, with Gerardo Martino taking charge.

“FC Barcelona is in immense mourning. Tito Vilanova has died at the age of 45. May he rest in peace,” said a statement from the Spanish club.

“The club wishes to express its most heartfelt sympathy to his family, who are being joined in these moments of mourning by FC Barcelona members and fans all around the world, as well as the rest of the footballing and sporting world.

“The Vilanova family has asked for respect for their desire for the strictest intimacy in the moments after his death.”

The club added that a “space for condolence” would be opened in the main grandstand at their Nou Camp stadium on Friday.

The ex-Barca youth-team player was Pep Guardiola’s assistant before stepping up to replace the now-Bayern Munich boss when he decided to take a sabbatical from football in June 2012.

Vilanova had surgery in December 2012 and spent 10 weeks in New York having chemotherapy and radiotherapy, but he returned in March 2013 to see his side take the Spanish title in his sole season in charge.

Barcelona won La Liga with a league record of 100 points from a possible 114, equalling the total achieved by Real Madrid in 2011-12.

In addition, his side set a new scoring record of 115 goals in 38 matches. His overall La Liga record stands at 32 wins, four draws and two defeats, as Barca finished 15 points clear of runners-up Real Madrid.