What a smile! Those tiny teeth look adorable but George's gnashers are probably giving the royal family a few sleepless nights

Home » Blog » What a smile! Those tiny teeth look adorable but George's gnashers are probably giving the royal family a few sleepless nights

At just eight months old Prince George is already stealing the limelight away from his parents as he gets his first taste of the spot light as they embark on their tour of New Zealand and Australia. 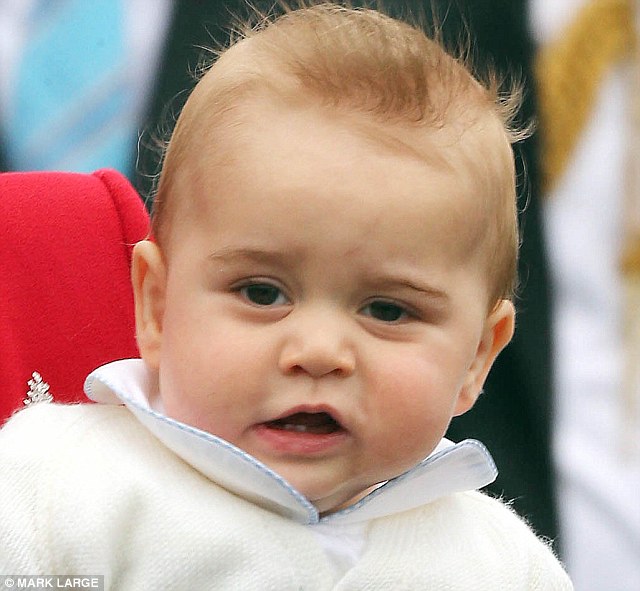 However while the presence of the future king is clearly delighting the crowds, and no doubt giving great joy to his doting parents, such a long and arduous schedule is likely to take its toll on the youngster.

His parents possible worry about how their son will handle the tour will be exacerbated by the fact that he is teething – with several gnashers clearly visible as he smiled and gurgled at Wellington Military Terminal on the first day of their official tour to Australia.

Kate and William’s unusual decision to base their tour around three main hubs in Wellington, Sydney and Canberra, rather than changing location daily, is thought to be an attempt to minimise the trauma on the baby Prince

The arrangement means his doting parents will be able to travel back to see George almost every night – bar a stop-over in Queenstown, New Zealand, and another at Ayers Rock in Australia.

The 18-day visit, which begins in Wellington, New Zealand, is the Cambridge family’s first official overseas trip together and Kate and William’s first major journey with eight-month-old Prince George.

Royal aides have warned that George’s scheduled public appearances are open to change given his young age and the fact that no-one knows how he will cope with the long journey and 11-hour time difference, especially since he is teething.